It is three years today since my dad died. Over time the narrative has become simplified, stripped to essentials. Codified.

For me it began when my mother called me as I was about to board my plane for Toronto, at Heathrow airport. My dad was fading fast, she said; she didn’t think he would last. I said I would call as soon as I landed. For seven hours, over the Atlantic and out of contact, I wondered if my dad was dying while I was out of touch and far away.

As soon as I landed at Pearson I turned on my phone. There were messages to call, from my sisters, and one, I think, from my daughter Kathy. There was no need to call, in one sense: I knew what the messages were about. But of course I did call, each person in turn. And then the strange drive in from the airport, with Rob, to her home in Marchmount Road, trying to figure out how I felt, what I should do, what this meant.

Last week, my son Jonathan was in Cape Town, having flown out from London to say goodbye to his school-friend Carl, who was dying of cancer. He and Kathy, who had flown down to give Jono her support, took Carl for one last ride up the cable car, to the top of Table Mountain. There was a farewell party, with Carl and his friends and family. After that, Carl faded fast, with great dignity Kathy said, despite the pain, and on Good Friday, early, I got a text message from Jonathan: ‘Carl has just died. No need to call. I need time to digest this.’

There is no road over death: no freeway past. It is there, you know it, and you get on with it.

Two very different photos offer two not-so-different windows into what has been so far (except for this morning, when Rob woke with an upset tummy and a horrible headache) a pleasant and sociable Easter long weekend.

In the first, impala shiver under the partial shelter of some trees, shaking off the rain, on a wet Saturday afternoon in the Pilanesberg National Park. Rob and I had taken Garfield and Corinne, friends from Toronto (though resident at present at Wiesbaden, near Frankfurt) out for the day – and right as we entered, though off in the distance, admittedly – was a grazing rhinoceros. In short order, we saw hippo, giraffe, wildebeest and zebra, and a while later, coming around a corner to find a line of cars and 4x4s queuing patiently for a turn to view, a massive lion, concealed in a thicket, tearing heavy hunks and long strips of flesh from the carcase of what we guessed must have been a large wildebeest. Nearby, in the tall grass, a lioness lay panting heavily.

The other photograph, taken from the bedroom of Rob’s sister Cynthia’s house in Dearborn, Mi., shows the flat planes of the neighbour’s doorway, a window, a metal fence. It comes from a peaceful and contented Friday afternoon at the computer, working on a range of images, trying out some of the techniques I learned a month or two ago, on the Nikon Capture training course. 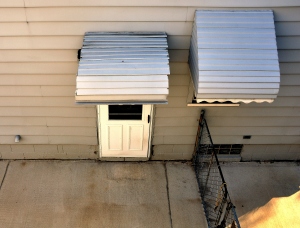 And there were two dinners, also, and two evenings of company and entertainment. On Friday morning, we picked up Garfield and Corinne at Sandton station, and dropped them off at their hotel, the spanking new Southern Sun at Hyde Park, up the road from us, to rest up and relax after the flight out from Frankfurt. In the evening, I picked my Durban-based sister Laura up at the same place, and brought her home with me, for dinner with our Canadian visitors. We made a warm blaze in the fire-pit and sat outdoors while a butterflied leg of lamb and South African boerewors cooked to perfection in the Weber beside us. And last night, Sunday, we had Garfield and Corinne over again, on the eve of their departure for Port Elizabeth, the Garden Route, Stellenbosch and Cape Town. This time Rob made a perfectly yummy savoury tart for a starter – caramelised onion and chorizo sausage – while I assembled an old favourite, Robert Carrier’s coq au vin, on the stove-top and in the oven. For dessert, Rob’s fruit tart with plums, a la Bill Granger.

To Tug the Heartstrings, Music Must First Tickle the Brain – NYTimes.com.

This is for my three musical children.

Languages Grew From a Seed in Africa, a Study Says – NYTimes.comth

Out of Africa, something marvellous and profound: language, the core of our humanity.

The last piece in today’s triptych of stories – taken together, a fitting decoration for the ANC altar.

BusinessDay – ALLISTER SPARKS: Time to fire a shot across the bows of the ANC.

I can hear the howls of rage and denial, at Allister Spark’s op-ed,  I can read the labels already: white racist, white liberal (seems they are the same thing, these days), past-his-prime media hack etc etc. I don’t care. I think Allister Sparks is right.

Follow the link to Nic Borain’s blog on the sickening and chilling Malema display at the High Court yesterday – armed thugs surrounding him, the self-importance, the hip arrogance and bully-boy bluster all too palpably on display. I have seen the future, and I can’t say I like it.

BusinessDay – A thug state in the making.

Remember when you were little, how time stretched away over the horizon, how school holidays seemed infinite and school itself, especially over the Christmas break (I am talking Southern Hemisphere, here) dwindled to mere nothingness? It’s strange, how subjective one’s sense of time is, how tied to events and phases, to moods and emotions, to hopes, fears and the suitcase-full of human experience.

Yesterday, almost in passing, Rob and I realised it was just about six weeks till her departure for Toronto and a two-week visit back home. Six weeks! When it was three months to go, a while back, it might as well have been next year – three months? That’s miles away! But six weeks – now that seems pretty close, and from now on, like an elastic band springing back on itself, the time will get rapidly shorter, and the days will fly past faster and faster.

Yet even three months, in other contexts, is nothing – in business planning, in strategy, even in planning for something like a wedding, three months is a short time horizon – six months is often what you need for operational planning of bigger events, a year or more is a normal part of one’s mental frame, even as one tries, in outline at least, to peer further, two, three, five years further down the track.

What did I want the next thirty years – the remaining years – of my life to be, I asked myself, five years ago, when I decided the time had come to make some really hard, difficult, painful choices: how would the next five years, even, change and constrain me, if I didn’t act then, at that particular point? Pain now, or irretrievable loss, time forever forfeited, later?

I chose pain over delay, the future over the past, even though, at times, I thought it would kill me.

Five years later, in the profound subjectivity of time, I look ahead six weeks to Rob’s departure and find myself thinking, in another six months, I too will be taking off for Toronto, and the next phase of my life. So time passes, and the future steals up upon us.

The last set of bathroom scales we had exploded one day into a million glass fragments, spread like anti-personnel mines across the tile floor of the bathroom. Before your knowing smirk turns to self-congratulatory laughter, let me tell you right now: hold that thought. You are wrong. The scale disaster had nothing to do with anyone’s weight or with weighing things at all. It had everything to do with the scale’s being bumped, accidentally, against the raised tile floor of the shower, a knock against the corner which caused a quite shocking shattering of glass and, as I said, shards scattered everywhere.

We haven’t had scales since then, not for six months or so, and so have lived in blissful ignorance of a nasty biometric truth. Mind you, scales, when I was young, were accurate, reliable, friendly things, telling you how good you looked, at least in the eye of the lowly beholder on the bathroom floor, looking up appreciatively at you with its one big cyclops eye to say – 60 kilos, my good friend.

They don’t make them like that any more. Nowadays scales lie; they scowl at you; they mutter libelous untruths with a stubborn, stuff-you expression on their smug little electronic dials. I should know. We bought a scale this morning, as part of our ongoing campaign to feel good and look better, and the damned thing had the effrontery to lie to me, right away – proposing a starting number for our weight-loss campaign – 5 kays off, each of us, by the time we hit the ground in Toronto in October – that was clearly, obviously, flawed and downright dishonest.

On the other hand, here is the good news. I have been weighed in the scales and found not wanting.

Who’sGot the Pranks on the Internet? – NYTimes.com.

None of you, of course, fell for any April Fool’s Day pranks (were there any?) – but as consolation, you might enjoy some of these ploys and innovations…